Initiated and overseen by Trusted Autonomous Systems, funded by the Royal Australian Navy (RAN), Warfare Innovation Navy (WIN) Branch, with expertise, hardware and manufacturing from Cellula Robotics, the SeaWolf pilot project will develop a demonstrator 12m Autonomous Underwater Vessel (AUV) and existing technologies by early-2023.  This project has been under discussion with RAN for 12-months and under contract for 6-months. Cellula Robotics have demonstrated experience in the delivery of AUV technologies and are in the final stages of establishing an Australian based entity to further the next stages of this project including Australian-based manufacturing.

The SeaWolf project is engaging with a range of Australian-based experts to deliver a prototype AUV and to harness technology, manufacturing and regulatory expertise to develop future AUV capability for the RAN.  TAS have contracted Cellula Robotics, Mission Systems, Ocean Wave Consulting, East Consulting Services and Cellula Robotics have also engaged a range of expert sub-contractors on this exciting project including the world renown Ron Allum Deepsea Services.

The Patrol Boat Autonomy Trial led by Austal on behalf of the Royal Australian Navy, Warfare Innovation Navy (WIN) Branch will establish robotic, automated and autonomous elements on a decommissioned Patrol Boat. This will provide a proof-of-concept demonstrator for optionally crewed or autonomous operations and explore the legal, regulatory pathways and requirements.

Austal are uniquely placed to undertake this project being the original designers and builders of the Armidale-class vessels. Austal have partnered with L3 Harris on the project. This project presents a significant opportunity to inform current and future maritime capability acquisition, and to build sovereign Australian capability in the autonomous maritime platform domain. It will pave the way for further work to achieve sustained and sustainable optimal crewing, to improve safety of Australian Defence Force (ADF) personnel and expose the Naval workforce to these technologies and other elements of the Navy RAS-AI Strategy 2040 including normalising human-machine teaming.

DefendTex-led with RMIT University, the University of Melbourne, and the Department of Defence Science and Technology (DST). Approved by the board in August 2018.

You can read more about DefendTex deployable, compact, low-cost UAV systems and the deployment of these technologies overseas to assist reconnaissance functions improving soldier safety.

Extract from a DefendTex video, viewable in full on DefendTex site.

Led by Consunet Pty Ltd with RMIT University, the University of Melbourne, the University of Sydney and DST. Approved by the board in November 2018. DUST aims to research, develop and demonstrate near real-time autonomous spectrum management to deliver orders of magnitude increase in agility and efficiency cost savings for Australian Defence and commerce.

The project has been a foundation for significant success for Consunet, announced in April 2022 as a partner with Lockheed Martin on AIR6500, developing ‘critical spectrum and manoeuvre technologies’.

Led by Skyborne Technologies and Cyborg Dynamics Engineering with the University of Queensland (UQ) and DST. Approved by the board in February 2019. The project aims to research and develop autonomous live reconnaissance effects assessment using AI and machine vision for day and night UAS operations over land. The system aims to advise operators on the legal and ethical aspects of fire support missions in near-real time.

The project has developed a technically mature system using state of the art neural networks, decision support capabilities, and middleware. The project outcome is now referred to as Athena AI and you can read more here about the system or click on the image below. 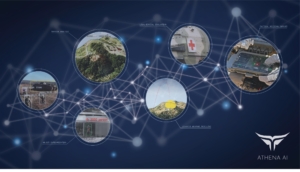 Recognition of symbols of protection by AI systems can provide an ‘ethical safety catch’.

Led by Boeing Australia and approved by the TAS Board in March 2019, this project will examine the embedding of machine learning techniques on board an uninhabited system to better understand and react to the environment. The project will design and test cognitive artificial intelligence algorithms to enable sensing under anti-access conditions and to navigate and conduct advanced behaviours in contested environments.

This pathfinder Project is now completed with consideration of future research underway. Media on this project is available from September 2019 and the conclusion of the Project in September 2020 where successful flight test missions were demonstrated.

Extract from a Boeing demonstration video, view more on links.

BAE Systems, working with researchers at the Universities of Melbourne and Adelaide, will exploit advanced AI techniques to deliver a next-level trusted autonomous platform capable of robust and persistent operation in complex, contested land environments.

Read more about the progress of BAE Systems and Army Robotic & Autonomous Systems Implementation & Coordination Office (RICO) conversion of M113AS4 Armoured Personnel Carriers into Optionally Crewed Combat Vehicles (links to a video of an Army video of an OCCV demonstration).

Mine Counter-Measures in a Day

Thales is partnering with DST, Academia (Flinders University, University of Sydney, University of Technology Sydney and the Western Sydney University) and Australian SMEs (INENI Realtime, Mission Systems) on a research and development study for new autonomous technologies and training solution to revolutionise mine clearance in littoral operations.  The five-year, A$15 million innovation project aims to develop technologies that enable a fundamental change in littoral operations, transforming this phase of the Mine Counter-Measure (MCM) mission.  The ‘MCM in a Day’ project will design, develop, test and evaluate various teams of micro Autonomous Underwater Vehicle (AUV) swarms and Autonomous Surface/Subsurface Vessels (ASVs) to deliver autonomous mine clearance research and technology that support and assist amphibious zone preparation. This new autonomous approach has the potential to support a significant operational step-change to the Royal Australian Navy by removing ADF members from harm’s way and accelerating the speed of mission execution.

The work is an addition to Thales existing experience in the field of autonomous Mine-Counter-Measures systems.

RMIT (Research) is leading a project for a self-organising, low-cost, high-altitude balloon constellation (pseudo-satellite) for persistent surveillance and communications. The lead is supported by a range of partners including LUXAerobot, the ADF – Defence AI Centre, SmartSat CRC and others joining soon. This project aims to deliver an initial prototype stratospheric self-organising balloon constellation for persistent ISR and communications, specifically to test key control algorithms and sensing capabilities for a full-scale project. It is a proof of concept for low-cost constellation to support persistent ISR and comms in military operations over land and sea; replace high-cost, low persistence space-based solutions; deployable from anywhere. The initial concept will consider bushfire monitoring as an application.

The Firefly pathfinder Project concluded and with lessons learnt transitioned during 2021 into a multi-stream High-Altitude Pseudo-Satellite (HAPS) Challenge led by RMIT and including TAS, SmartSat CRC and the RAAF Air Warfare Centre.