My TASDCRC project involves exploring robotic whisker technology we originally developed in 2016, and finding ways of using them to allow drones to fly through interior spaces and around objects and obstacles without needing to use heavy cameras or complex, expensive lidar systems.

PhD in Engineering in ANU in 2008, BE in Systems Engineering from ANU in 2002. Post-doct at Yale from 2009-2011. 2013 ARC DECRA Fellow. Member of the IEEEE. Secretary of the Australian Robotics and Automation Association. Co-founded the UQ Robotics Design Lab in 2012.

Few who dreamed of being an astronaut or a fireman when they were little got to grow up and live that dream, but I did. I knew I wanted to be an engineer from the age of 5 – before I even knew what the word for engineering was! – and that ambition never left me. I adore gizmos and gadgets and I’m never so happy as when I’m designing something nifty; I am passionate about inventing new and amazing technology and if it solves real problems and helps people, even better! I’m particularly enthusiastic about robotics and flying things, so it was inevitable that I wound up doing some of the foundational work in developing multirotor drones. My PhD project laid the ground work that allows for the current generation of highly-capable hovering robots that are finding uses in applications as diverse as delivering food, collecting whale snot, or finding lost hikers. Taking the capabilities to the next level, I also did some of the seminal work in aerial manipulation – allowing hovering robots to contact and manipulate objects while hovering. This has become an entirely new field of aerial robotics research, and one day it will allow flying robots to do all sorts of useful manual tasks at altitude. Currently, I’m an associate professor and senior academic in the UQ Robotics Design Lab, helping come up with new ways of building robots to allow them to do new and better things, cheaper.

My TASDCRC project involves exploring robotic whisker technology we originally developed in 2016, and finding ways of using them to allow drones to fly through interior spaces and around objects and obstacles without needing to use heavy cameras or complex, expensive lidar systems. By understanding how the wind produced by a drone’s rotors interact with their surroundings, and by using advanced sensor technology to capture reflected information from it, we can use the very motion of the drone itself as a sensor to allow it fly safely in unknown environments. One day, this could have applications for exploring new spaces, avoiding collisions, and navigating inside buildings and caves.

Recent Blog on the research: The Best Robot is the One that Gets Destroyed 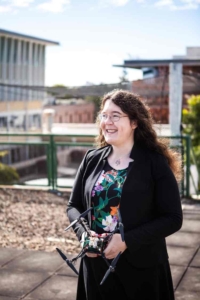