Military operations in urban terrain inherently bring soldiers into close proximity to the enemy  and enclosed spaces , where mobility and visibility are limited.  This makes mines, boobytraps, ambushes and enfilades natural tactics, especially for the defender.  The experience of Australia in the Middle East in the last two decades has brought many of those challenges into sharp relief.  Small mobile robots have already proven useful for engaging with boobytraps and IEDs, but their value as tactical ISR platforms has substantial potential yet to be realised.  Prospective examples include forward screening autonomous vehicles advancing immediately ahead of a convoy to look down side-streets, or micro drone swarms penetrating buildings before squads of soldiers.  Inherently, robots undertaking these operations will be exposed to high risk, and thus their destruction should be seen as both inevitable and even desirable: the robot casualty is a proxy for a human casualty.

Framing the urban robotic agent as a surrogate for a human soldier offers an opportunity to rethink some foundational assumptions about the employment of combat elements.  Robots are technical equipment and, beyond the already mentioned attritability, differ from soldiers in several key ways:

In addition to this, we note that robots cost money to acquire, provision, deploy and maintain.  As with commercial robots – which also embody substantial capital expense – military robots that are not operating are not returning value for that investment.  Furthermore, robots incorporate numerous systems predicated on advanced computer processing, sensor, and battery technology.  These fields of engineering move quickly, with older systems rapidly becoming obsolete.  That is, the competitive value of aging robotic systems will depreciate relative to its adversaries; the “use it or lose it” maxim applies.

The rate of depreciation of robotic systems is high: a drone model that was cutting-edge in 2011 likely has half the endurance and a fraction of the processing capability of a model from 2021.  The advent of action autonomy and deliberative planning vs robotic adversaries will make this acute: obsolete robots will be disadvantaged compared to opponents with faster OODA loops and better decision making.  In contrast to large, expensive, strategic assets (eg. Triton, ATS) which may have scope for upgrades to stay relevant, the smaller, cheaper tactical, systems used in urban combat may not be economically feasible to refit – or even extensively maintain – due to the cost of labour relative to outright replacement.

Technological obsolescence implies an inherent utility shelf-life. A tactical robotic system which is not exhausted or destroyed by the completion of a conflict is unlikely to have substantial residual value, except perhaps for resale or use in training.  From an economics perspective it can be argued that – given perfect knowledge – any time-limited good that is procured, issued, deployed, transported into conflict and returned unused constitutes wasted expense.  While we do procure contingency systems we hope never to use (eg. deterrents or escape/rescue equipment) urban tactical robots do not fit in this category.  Unlike humans, there is limited social or fiscal benefit to preserving an urban tactical robot past the end of a conflict.

This leads to the conclusion that commanders can regard their tactical robots not only as attritable assets whose sacrifice may save lives, but as agents whose employment comes with tacit permission for (and perhaps even the expectation of) consumption, expenditure or destruction.  Thus, a commander may derive the most value from a robotic asset by leveraging the capabilities of her robots to the maximum extent to derive the greatest operational benefit: robots can and should be utilised to the fullest and pushed to breaking point when expedient for the achievement of military objectives. 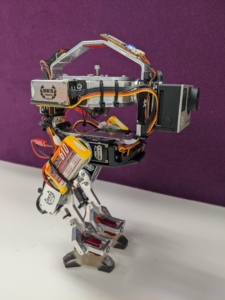 While this may all make sense by utilitarianism, nevertheless it creates a paradox: robots should be expendable yet sophisticated machines can be so expensive that putting them in harm’s way becomes economically infeasible (or at least strongly undesirable).  Obviously, the lives of soldiers are held in highest value and it is always preferable to trade a human casualty for a robot casualty, but potential loss of costly equipment can make a commander hesitant to put them in jeopardy.

The fiscal dimension to warfare cannot be forgotten, and over-investment in pricey, highly sophisticated platforms can put the wider mission at risk.  Cost-expedient irregular warfare tactics for destroying or disabling expensive tactical urban robots is a solid strategy, especially in asymmetric conflicts: a state actor may conclude that an operation with spiralling financial costs is too expensive to continue.  We can expect to see the emergence of mature counter-robot urban tactics in the next five years, especially in the context of protestor anti-police action.  As civilian groups trial and evolve effective tactics against wheeled, tracked, legged and flying platforms used by law enforcement, state military observers will take note.

The solution to the paradox of robot expense vs expendability is to disavow costly, highly advanced tactical urban robots in favour of platforms that are performant but relatively unsophisticated (and thus inexpensive).  Military history is replete with examples of over-engineered equipment being defeated in the field by more pragmatic, economical and often more numerous competitors.  This meshes with TAS’ philosophy of “the smart, the small and the many”, to which we would add “the cheap”.

In the context of tactical urban warfare, perhaps the most valuable function of a robot is ISR, which requires deft navigation and locomotion but little functional independence or onboard intelligence.  Our research into embodied robotics intelligence embraces this: we aim to replace delicate sensing and cognition subsystems with judiciously designed mechanical structures that exhibit desirable emergent attributes and which can be cheaply mass-produced.  For example, by integrating low-cost sensors into miniature rotors, we seek to use passive aerodynamic interactions with the environment to allow micro drones to avoid obstacles and navigate entirely without the cost of cameras or lidars and their attendant processing.  Similarly, we are developing a new class of low-cost bipedal walking robot that will be able to cross treacherous terrain by using a novel stabilisation method employing mechanical gyroscopes, without requiring the extremely capable (and expensive) actuation, sensing and control systems of modern advanced robot bipeds.  These robots are “stupid” in that they lack the cognition power of other devices, but they provide advanced, competitive capabilities at a fraction of the cost of the traditional computation-centric approach.

Techniques such as these promise the commander more robots for the same cost and more license to use them comprehensively.  While each individual robot might be technically less impressive than what achievable technology enables, the freedom to commit them in preference to an precious asset offers superior benefit in the field.

A/Prof Pauline Pounds is an aerial robotics researcher, engineer, and serial entrepreneur.  She completed her PhD in robotics at the Australian National University in 2008 and post-doc at Yale in 2011 before taking a faculty position at UQ in 2012. She specialises in unmanned aerial vehicle dynamics, propulsion, stability, and control, with recent advances in legged locomotion and sensor module technology.  She is a 2013 ARC DECRA fellow, 2020 TASDCRC Fellow, and 2020 ATSE Batterham Medal recipient.  She has 27 patents and is Aerial and Field Robotics Senior Editor for RAS IEEE Robotics and Automation-Letters and Vice President of the Australian Robotics and Automation Association.