Uncrewed maritime vehicles are an increasing feature of activity on the ocean
Navies around the world are investing in uncrewed maritime vehicles (UMVs). A few examples clearly demonstrate this trend. Singapore has begun testing surface UMVs to use in patrolling the Singapore Strait. The US Navy plans to use the Sea Hunter UMV, a medium-sized UMV designed to track submarines, in fleet exercises in 2021. This is only the beginning of the US investment, with the Defence Secretary recently revealing plans to push for over 150 surface and subsurface UMVs by 2045. Some UMVs appear to be currently used on spying missions: Forbes has reported that a UMV washed up on a Scottish beach near a strategically important submarine lane, but has not been claimed by any government.

Australia is no exception. The Australian Navy recently explained in the RAS-AI (Robotics, Autonomous Systems and Artificial Intelligence) Strategy 2040 some of the missions they hope that UMVs will be able to accomplish by 2040, including intelligence gathering in hostile environments, mine laying, countering fast attacking craft, and strikes against land based targets. These missions will require a diverse range of UMVs: some small, some large, some operating underwater and some in swarms.

This flowchart demonstrates the complexity of this exercise and identifies some of the questions that are important. It shows that depending on their size, UMVs may be subject to obligations protecting the environment, the safety of any passengers and other vessels, or lighting, look-out and sound requirements. While some of these requirements do not strictly apply to naval vessels (as they only apply to non-governmental vessels), many States follow them as a matter of policy. 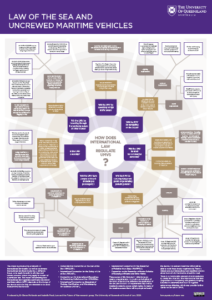 Importantly, some parts of the legal regime are ill-suited to the regulation these devices. To give a couple of examples, the International Convention for the Safety of Life at Sea – known as SOLAS – provides that it must be possible to immediately establish human control of a ship’s steering in areas of high traffic density. It is unclear how this rule might apply to UMVs and whether the capacity for remote control would be sufficient. Another example is the definition of warship in the United Nations Convention on the Law of the Sea (‘UNCLOS’). Under international law, only warships can exercise ‘belligerent rights’ – which includes using force against other vessels or participating in blockades. The difficulty is that UNCLOS requires warships to be “under the command of an officer” and be “crewed by members of the armed forces”. It is unclear whether an UMV operating autonomously would be able to satisfy these requirements.

Research is underway to clarify the application of the law to UMVs
States, international organisations and researchers are beginning to address these questions. The most significant of these has been the work of the Maritime Safety Committee of the International Maritime Organisation (IMO), which is conducting a regulatory scoping exercise for the use of maritime autonomous surface ships. This exercise aims to map if and how the law of the sea applies to the commercial use of UMVs. Similarly, the Legal Safety Committee of the IMO has commenced a review of how the legal instruments related to maritime security would apply to UMVs. An international group of experts recently commenced a project to review the leading statement of the law of naval warfare – known as the San Remo Manual and last updated in 1995 – partly to consider how naval UMVs are regulated. This work cannot come soon enough.

Further reading
Simon McKenzie, ‘When Is a Ship a Ship? Use by State Armed Forces of Un-crewed Maritime Vehicles and the United Nations Convention on the Law of the Sea’ (2020) 21(2) Melbourne Journal of International Law (forthcoming).