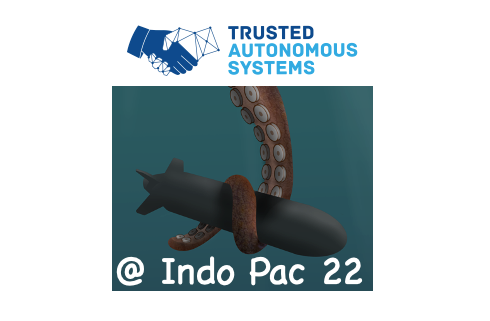 TAS Assurance of Autonomy lead – Maritime, Rachel Horne will be presenting on ‘An Australian code of practice for autonomous and remotely operated vessels’, 0900 Wednesday 11 May at the International Maritime Conference, and ‘Improving the Regulatory Experience for Autonomous and Remotely Operated Vessels: TAS Regulatory Project Overview’, 1255 Wednesday 11 May at Autonomy in the Maritime Domain.

Robert Dickie of Frazer-Nash will be presenting on the TAS Assurance of Autonomy COLREGs project, ‘An enabling framework to support COLREGS compliance for autonomous and remotely operated vessels’, 0930 Wednesday 11 May at the International Maritime Conference.

Through disruptive innovation, Warfare Innovation Navy (WIN) Branch enables the Royal Australian Navy to be at the forefront of asymmetric warfighting for joint integrated effects. The iDrogue project, initiated by Trusted Autonomous Systems, led by Ocius Technology, and funded by WIN Branch, was established to develop and demonstrate a novel Autonomous Underwater Vessel (AUV) launch and recovery system. Ocius, a leading Australian innovator, is partnered with the Australian Maritime College and University of New South Wales on this exciting project. This pilot project is being conducted over 12-months, through 2022.

Dr Robert Dane of Ocius Technology will be presenting ‘Persistent autonomous data gathering and monitoring – a future vision for autonomous ocean observations’, 1030, Wednesday 12 May at the International Maritime Conference.

Ocius and a prototype iDrogue are represented with TAS on the Royal Australian Navy Capability – Autonomous Systems stand 3J24. Ocius will also have a presence on additional stands.

The Patrol Boat Autonomy Trial led by Austal on behalf of the Royal Australian Navy, Warfare Innovation Navy WIN Branch will establish robotic, automated and autonomous elements on a decommissioned Patrol Boat. This will provide a proof-of-concept demonstrator for optionally crewed or autonomous operation and explore the legal, regulatory pathways and requirements.

Austal are uniquely placed to undertake this project being the original designers and builders of the Armidale-class vessels. Austal has partnered with L3 Harris on the project. This project presents a significant opportunity to inform current and future maritime capability acquisition, and to build sovereign Australian capability in the autonomous maritime platform domain. It will pave the way for further work to achieve sustained and sustainable optimal crewing, to improve safety of Australian Defence Force (ADF) personnel and expose the Naval workforce to these technologies and other elements of the Navy RAS-AI Strategy 2040 including normalising human-machine teaming.

Mr Tim Speer of Austral will be presenting ‘Australian defence opportunities for un-crewed vessels’ 1700 Tuesday 10 May at the International Maritime Conference. Austal are represented at Indo Pac 22 at stand 2H6.

MCM in a Day Thales project underway with TAS

Project participants Thales are also at Indo Pac 22. Thales is partnering with DST Group, Academia (Flinders University, University of Sydney, University of Technology Sydney and the Western Sydney University) and Australian SMEs (INENI Realtime and Mission Systems) in the development of new autonomous technologies that promise to revolutionise mine clearance in littoral operations. The Mine Counter-Measures ‘MCM in a Day’ project will design, develop, test and evaluate various teams of micro Autonomous Underwater Vehicle (AUV) swarms and Autonomous Surface/Subsurface Vessels (ASVs) to deliver coordinated, multi-robot autonomous mine clearance technology to support and assist amphibious zone preparation. This new approach has the potential to support a significant operational step-change to the Royal Australian Navy by removing ADF members from harm’s way and accelerating the speed of mission execution. The work is leverages and benefits from Thales existing experience in the field of autonomous Mine-Counter-Measures systems. You can find Thales at stand 3A6.

There are a range of other TAS Participants present at IndoPac 22.  TAS staff will be present generally and specifically at the iDrogue display 3J24.

TAS are a Defence Cooperative Research Centre funded through the Commonwealth Next Generation Technologies Fund and also receive funding support from the Queensland Government. You can find out more about TAS by attending our Symposium, ‘Accelerating cross-domain autonomy’, 15 June in Brisbane.